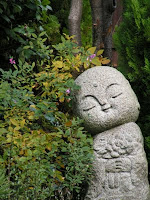 On Sunday, I will go to sangha member Susan Spencer’s house to glaze my jizo. A jizo is a guardian spirit, a little bodhisattva, who protects women, children and travellers. The statues come in various forms and shapes, but all have a beatific smile, a childlike appearance, with great serenity and patience resting on their brows.
When I lived in Japan, I saw jizo everywhere. Because they are frequently purchased at temples to honor children lost to miscarriage or abortion, or infant death, the jizo I saw were usually dressed, clad in miniature red knitted bibs, shawls or hats, with toys placed nearby. Women use the figures to grieve, and to wish the lost children (mizuko, or “water children”) safe passage to their next place.
I have always wanted to have a jizo of my own, but never made that happen. Then, in the spring, Russian River Zendo created landscaped temple grounds with a gift from a sangha member who had passed away. Ceramicist Susan Spencer suggested that the sangha create jizo in her studio for the grounds. Over the summer, I participated in one of the workshops, making a jizo for the garden.
It was a wonderful, frustrating experience in “beginner’s mind.” I had a clear idea of what I wanted my jizo to look like – but I hadn’t worked with clay since fifth grade, and even back then, I was none too skillful at it. That day at Susan’s, nothing seemed to be going as I planned. The head was misshapen, the ears too big, the nose odd looking. I was so annoyed after the first thirty minutes that I almost left and went home. I’ve never been very patient with tasks that I don’t have a natural talent for – I guess that’s the down side of having too many other things come easily for me.
But I eventually got over my surliness and just did the best I could, summoning up as much humor as possible. The end result was a figure who looked more like Yoda from Star Wars than a Japanese monk. Sigh. He now stands guard at Russian River Zendo, a tangible testament of my imperfect offering.
Susan offered to hold another workshop this fall, for those of us who wanted a jizo for our own gardens at home. I decided to try again. I kept it really simple this time, going on the theory that less is more. In particular, smaller ears!
I haven’t seen how he survived the firing yet – and this will be my first time to do glazing, as Susan did that for me the last time. I can’t wait to meet up with my little jizo again. I am determined to love him, no matter how he turns out. It’s the heart in the clay that matters, right?
Language note: In Japanese, there is no plural form for words. So, when I use Japanese words, like jizo, I don’t add an “s” when there are more than one of them. Whether the subject is singular or plural is indicated by context only.
Share this Story
Previous: Do I Have to Share My Ice Cream?
Next: Sewing a Rakusu

The Complexities of Charity