A Lesson from Ghandi 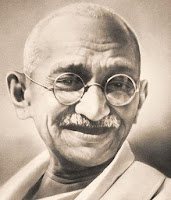 Ghandi – just saying the name conjures up an awesome energy, a reverence, a worshipful adoration. When people are asked, “What if you could have dinner with five people, living or dead, who would you choose?” the name “Ghandi” frequently makes that top five list.

And yet – I read something today about the saint-like Ghandi that taught me a lesson not of what to do, but of what to avoid.

I am reading the book The Elephant and the Dragon: The Rise of India and China by Forbes magazine Asia editor Robyn Meredith. In it, she chronicles Ghandi’s legacy in India. Much of that inheritance, we know, was a great gift. He embodied the idea of nonviolent protest, setting an example that would transform human and civil rights movements in the coming years. And he gave India a sense of identity separate from British colonial rule.

But did you know that he also was completely against modern medicine, because of its ties to the Western world? When his own wife lay dying from bronchitis, doctors flew in penicillin to save her life. Ghandi believed that even the use of a needle contradicted his philosophy of nonviolence. So he turned the medicine away, and sat at his wife’s bedside, holding her hand until she died, of a completely curable disease.

Meredith also states that Ghandi professed the only acceptable form of birth control was abstinence. He remained sexually abstinent for the last 42 years of his life. Wanting to follow his example, his fellow country men and women shunned all methods of contraception. But, being less saintly than their guru, they failed to live up to complete abstinence, of course, leading eventually to the population explosion in India.

There is absolutely nothing wrong with Ghandi’s belief systems. They are admirable, and praiseworthy. But to these lengths? To the detriment of the lives of others? He failed to see the value of the middle way.

Make a vow not simply to make a vow. Hold steadfast to resolution only when it is the right thing to do, not when it is the only thing you know how to do.

As much as we admire the saints, it is actually more difficult to live in the world of gray than it is to practice in the realm of black and white. That is our Zen challenge: the middle way.

Share this Story
Previous: Upcoming Schedule, Jan. 26-30
Next: All That I Am

Mundane Anguish: Behind the Smile