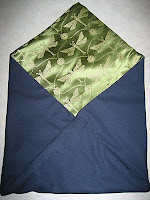 Yesterday I sewed the envelope for my rakusu, the final step in my sewing process. All nine of us were present yesterday, coming together one last time specifically to work on the envelopes, even though many in the group are not quite done with the rakusu themselves. But all are so close – so close!
Our teacher, Tony Patchell, came to Sebastopol to pick up the two completed rakusu, Debi Papazian’s and mine. Our sewing teacher Connie Ayers had set up a small altar just outside of our sewing studio. She lit a candle and incense. Debi and I took turns passing our rakusu through the incense smoke three times, bowing to the altar, and then turning and bowing to Tony, handing him the rakusu. It was official. We were done!
Sewing the envelope was especially fun because we got to be a little bit wild. The rakusu itself is pretty traditional, with its staid navy blue. The only deviation was that we were allowed to choose our color of thread. I chose a shimmering green. The envelope is made of the same navy blue on the outside, but on the lining, anything goes. Generally you use silk, something with some stiffness to help the envelope stay flat. But colors, patterns – go for it! I chose a green that matches my thread, with dragonflies.
Jukai is now five months away. So after pouring myself into this sewing for the last six months, I have now just given it away, and I won’t see my rakusu again until August. And then, the blank white silk on the opposite side will have my new Buddhist name, and I will be taking refuge in Buddha, dharma and sangha. Five more months.
Share this Story
Previous: Upcoming Schedule, March 23-28 and Beyond
Next: Bad Tire Karma

The Mystery of Vow