Sitting Alone with Ourselves 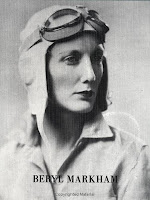 The act of sitting alone with ourselves on the cushion is on the one hand so ordinary, so simple. It is quiet, no fireworks, little ceremony. A human being sitting still on a cushion in a hushed room, that is all.
And yet. At the same time, it is the most extraordinary thing in the world. It is precisely what so many of us spend much of our lives trying to avoid. We fill up our days with busyness and noise and social interaction, with drama and intrigue, aspirations and dreams. We are constantly moving and striving, reaching ahead or desperately trying to hold onto what is slipping away.
Beryl Markham, a female aviator who grew up in Africa in the early 1900s, lived a life of adventure and boldness. Her childhood was spent learning to hunt wild boar and other creatures of the African jungles with the Masai people. She also raised horses with her father, eventually becoming the first licensed female horse trainer in Africa to support herself at age 16 when her father lost the family estate after several years of severe drought. Soon after that, she learned to fly an airplane, and became a freelance pilot, in the 1920s and 1930s.
In 1936, she made a solo flight from England to Nova Scotia, the first woman to make the westward Atlantic crossing solo and the first person to make it from England to America nonstop.
In her memoir, West with the Night, Markham talks about the real challenge of that 20 hour flight. Surprisingly, it is not the fear of death, or the technical aspects of flying. It is the huge expanse of time that she had to sit alone with herself.
She said:
You can live a lifetime and, at the end of it, know more about other people than you know about yourself. You learn to watch other people, but you never watch yourself because you strive against loneliness. If you read a book, or shuffle a deck of cards, or care for a dog, you are avoiding yourself. The abhorrence of loneliness is as natural as wanting to live at all. If it were otherwise, men would never have bothered to make an alphabet, nor to have fashioned words out of what were only animal sounds, nor to have crossed continents — each man to see what the other looked like.
Being alone in an aeroplane for even so short a time as a night and a day, irrevocably alone, with nothing to observe but your instruments and your own hands in semi-darkness, nothing to contemplate but the size of your small courage, nothing to wonder about but the beliefs, the faces, and the hopes rooted in your mind — such an experience can be as startling as the first awareness of a stranger walking by your side at night. You are the stranger.
The Atlantic crossing, really, was not simply a feat of a woman and a plane, a show of technical mastery and bravery. It was also, in a way, a grueling tangaryo, a 20-hour straight period of zazen, sitting upright in a very small plane, balanced atop fuel tanks, with much of the flight taking place in the dead of night, with almost no visibility. It was truly a meeting of oneself, the stranger.
And so, when we sit, we too are undertaking a hero’s journey. Crossing to the other side, whether it is to the other side of the Atlantic in a small plane, or to the other side of our own fears in our own rooms, requires a hero’s courage and steadfastness.
Rendering the ordinary extraordinary – and ourselves face to face with the stranger. No small task.
Share this Story
Previous: The Beige of Buddhism?
Next: Calming a Room Full of Crying Quintuplets

Give Your Cow a Large Pasture

Letting in the Sun