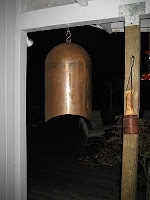 Last summer, when Sabrina and I were in New Mexico, while I attended a writing retreat, Sabrina stumbled upon a small town named Madrid. When she picked me up at the end of my stay, she took me there to share her find.

They pronounce it MA-drid, unlike the similarly-spelled city in Spain; it was only a few blocks long, but contained a thriving little arts community, with enticing shops at every turn. We meandered through a store filled with items made from recycled goods, where I picked up a notepad constructed out of an old license plate. And we could not resist purchasing a whimsical welded bat, hanging upside down. We dubbed him “Madrid,” and he now peeks from under his wings on our deck.

We were being tourists. It was fun. We went in and out of shops, oohing and aahing over all of the interesting things for sale. Neither of us are shoppers, generally, so this was a treat. We were definitely in vacation mode.

But then I found the real reason that I was in Madrid. As usual, Sabrina had something left as a surprise. There was an art gallery whose outside yard was filled with temple bells. They were stupendous. We walked around admiring all of them, striking each of them in turn. The sounds were gorgeous. And Sabrina said, “Do you want one?”

“No, we can’t,” I said. “They’re too big. They’re too expensive. Thank you, sweetie, but no.” I hit one last bell wistfully, and we went to go find some lunch.

Let me tell you one thing – Sabrina is persistent. Lunch was only a detour. Two hours and some price haggling with the dealer later, we left Madrid with a huge temple bell on the floor of our truck.

The bell weighs about 70 pounds, I would guess. We got it all the way home to California, lying mutely in the back seat next to its leather-wrapped striker. Now what? Where were we going to hang it? At the gallery, the bells had been hung from metal stands. A co-worker of Sabrina’s offered to make one for us. We had taken photographs, and gave him copies. But it was a favor; he would do it in his spare time. The bell was relegated to an ignoble position on the floor of the garage, wrapped in a beach towel.

Time passed. A lot of time. Yesterday morning, I was sitting at my desk writing, and I heard Sabrina out on the deck, working. I knew she had yardwork plans. She had said she was going to the hardware store for weedspray. But when I stepped outside for a smoke, I saw that she had installed a new post underneath our porch roof – and immediately, I knew. It was for the bell.

Our porch has a roof, and we had considered hanging the bell there, but we were afraid it was too heavy. Sabrina solved the problem by adding another post, creating a solid frame. The bell was finally liberated. We lugged it up the stairs, managed to hoist it up into the air high enough to get it on the hook, and, voila! We had ourselves a bell!

The moment had come. I picked up the striker, and hit the bell. After nine months of silence, its rich, deep tone rang out, filling the valley air.

It was worth the wait.

Share this Story
Previous: Upcoming Schedule, May 29-June 6
Next: The Fragility of Life

The Mystery of Vow