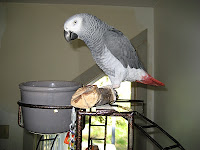 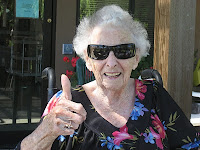 It’s been a long ten days. Only ten days? I’m just now getting caught up on my sleep. My grandmother is on the mend – this saucy photo that I snapped today is proof of that. She spent a week in the hospital, but has now been released to a skilled nursing facility. The first two days there were rough; she had been in bed for days, and just getting dressed was taxing. Trying to walk with a physical therapist completely exhausted her. But today, for the first time, she was truly her old self again, spirited, strong willed, full of energy, and determined to get home as soon as possible.

I have been making daily trips to visit her, doing what I can to cheer her up and keep her motivated. I brought helium balloons and flowers, a stuffed animal duck, and a solar-powered dancing flower. I stopped by the grocery store to pick up Entemann’s glazed donut holes, her favorites. I plied her with M&Ms. Her drab walls were cheerless; I wanted to brighten them with posters of garden scenes, but found that no one carried such posters, after searching everywhere. I had to settle for posters of puppies and kittens. At least they’re colorful and cute.

Most important, of course, has been simply being there. Kissing her hello, touching her hands, smoothing her hair, calling her “Lady Jane.” I don’t even remember why I started calling her that, but it’s a nickname that I picked up, and it fits.

The beauty of all of this has been the closeness I have felt, being able to be there for her, and also being able to be a support person for my uncles Ken and Lee, my aunt Alice, and my other relatives that have been involved in her care. Gladys is my father’s mother, the father that I lost six years ago to cancer. In his memory, I am grateful that she is surrounded by all of our love.

In the middle of all of this, Sabrina and I had another crisis at home. On Monday, I had spent a full day at work, capped by an evening school board meeting. I returned home at 9 p.m.; Sabrina was already in bed, since she wakes at 3 a.m., leaving the house early to start a 5 a.m. shift each morning. I greeted the dogs, let our parrot Barney out of his cage, and went to my office to work on some paperwork. At midnight, I was getting ready for bed, and I went to put Barney back in his cage. He was up on top. As I asked him to get in for the night, I saw that he was wobbly and unsteady. His breathing was erratic, and his chest was heaving. Alarmed, I picked him up and held him. He was clearly in distress. I went to wake Sabrina. “Something’s wrong with Barney.”

She sat up blearily, and shook herself awake. We started making phone calls. We’ve been in this position before, unfortunately – there are no pet clinics in the area with 24-hour avian specialists. The closest is U.C. Davis. We finally found a doctor at Pet Care in Santa Rosa who said she could stabilize him for the night, giving him oxygen and fluids, until he could be seen by an avian vet. We made a 1 a.m. trip to the emergency clinic. He was placed in a glass tank with oxygen, and given subcutaneous fluids, because he had been vomiting and was dehydrated. It was a long night. We had to leave him there, and make our way back home.

We were both exhausted, having just spent the last four days in emergency mode with my grandmother. We took the day off work, and spent the morning going to veterinary clinics, getting x-rays and bloodwork done. He was in the hospital for two days. Walking past his empty cage at home each night was breaking my heart.

We finally got word – it was the same problem he had experienced three years earlier, when he had been diagnosed with high cholesterol, a problem that occurs in African greys. He had been on cholesterol medication for a while, and we had radically changed his diet, and then stopped the medication, thinking he was alright. When I asked the vet what exactly happened that Monday night, she said, “He was having a heart attack.” Thank god I was awake, and I noticed.

So – now Barney is safe at home, on the mend, and from here on out, on birdy Lipitor.

And we are feeling exhausted, but grateful. Right now, everyone is doing okay. It would be nice to have a couple of days of boredom, just for a change of pace.

Share this Story
Previous: The Fragility of Life
Next: Does That Evil Little Voice Ever Shut Up?

Mundane Anguish: Behind the Smile