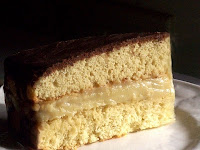 Tomorrow, members of our sangha will be meeting to bake cakes for Buddha’s birthday celebration, which will be held on Sunday. Our sangha has a tradition of preparing Boston cream pies, using Darlene Cohen’s mother’s recipe.

This year, I will not be among the cake-baking team, having been given a reprieve by Tony Patchell because he knew I’ve been swamped at work the last couple of weeks since my boss is out of town. I will instead be spending the day taking a much-needed rest and relaxation break with my partner Sabrina.

But I will miss being part of the cake crew. I have participated twice, and both occasions proved fertile ground for stretching myself.

The first year, I had just started to attend Zen sittings in Healdsburg. I was a sporadic attendant, very hesitant about my participation, and unsure about whether or not this was the place for me. I showed up at the cake baking day, held at Phil and Barbara McDonel’s house, with the same half in/half out mindset. At that point in my life, I was terrified of cooking. I was able to do very simple baking, by myself, like chocolate chip cookies. But something complicated, like these cakes, was way beyond my comfort level. And to do it in front of other people? So, what I did was watch. There were seven or so people there, and so no shortage of hands to help. I pretended that no one noticed that I wasn’t actually doing anything. I just moved from one side of the kitchen to the other, chatting, munching on the snacks that were out, watching. But I didn’t do a single thing to help.

The second time I went to bake the cakes, I was much more firmly entrenched in my practice. I was sitting regularly, and had begun to feel a part of the sangha. I had also begun to teach myself how to cook. From the moment I arrived, I was a part of the team, instead of just an onlooker. I was assigned to make the cake batter.

For those of you not familiar with a Boston cream pie, it consists of a layer of cake, a layer of pudding, topped by another layer of cake, all of which is covered in rich chocolate frosting. Because we were expecting a big crowd at the party, we were going to make two cakes.

I was right in the middle of the action, doubling the portions, making enough for two cakes. But somewhere along the line, I missed the concept, and didn’t realize that each completed cake had, essentially, two cakes inside it, so that there would be four cakes total to bake. I made all that batter, and poured it into two cake pans, and popped it into the oven. We were all watching it expectantly, to see how it was doing. And I said, “Wow, it’s really rising high.” Eventually, somebody figured out that I had poured two cakes’ worth of batter into each cake pan — oops!

Initially, I panicked. I had been feeling so much a part of the group, so good about belonging. And then, feeling that I had screwed up, all of my old fears about inadequacy and rejection, etc. came up. I wanted to disappear. I began to make another batch of batter right away.

But then, a funny thing happened. We got creative, and we started thinking our way out of the problem. It turned out that the cakes still baked okay, all the way through. And we found that we were able to slice the mushroomed cap off the top, salvaging it as a separate layer. The whole thing ended up working after all. And through it, there was humor, and forgiveness, and community.

That was the first day I understood what sangha meant.

Have you heard the story of Angulimala? He was a very bright student in India, so bright that he caused jealousy among the other pupils. The students managed to get their teacher to turn on him, and as a grisly test, at the completion of his studies, the teacher asked Angulimala to bring back 1,000 fingers from people he had slain.

So off went Angulimala, killing people wherever he met them, and collecting the fingers in a chain, or mala, around his neck.

The local king heard about these murders, and sent his army out to kill Angulimala. The man’s mother learned of the king’s plan, and set out to warn her son. But at that point, having collected 999 fingers, and thoroughly twisted by his violent pursuits, Angulimala would even have killed his own mother to reach his goal.

This is where Buddha enters the picture. He sensed the situation, and decided to go and save Angulimala from his own fate. He appeared before Angulimala, and the criminal thought, “Oh, here is my last victim!” He rushed towards Buddha, ready to kill him and cut off his finger. But although Angulimala ran as fast as he could, the Buddha was always just one step ahead of him, gliding along effortlessly. Finally, exhausted, Angulimala demanded to know what kind of man this monk was.

And, the texts say, Buddha answered in this way:

Hearing these words, Angulimala threw down his sword and became a disciple of the Buddha, donning the monk’s robe and achieving nirvana.

So what’s the lesson? Being an avid student, so eager to please that he lost his own moral compass, Angulimala serves, I guess, as an exaggerated example for all students of the dharma. And I also surmise that even when you’re that far gone, you’re still capable of recognizing the Buddha when you see him, and nirvana is still within your reach.

Having read this story, though, I will never look at my mala the same way again. Thank goodness Buddhist tradition decreed strings of beads instead of fingers. I’m not sure I could meditate while counting knuckles.

Under the Bodhi Tree

Posted by: practice in Buddha, Darlene Cohen Leave a comment

Today, Dec. 8, is the day celebrated throughout the Buddhist world as the time when Buddha attained enlightenment. Priest Darlene Cohen shared the traditional story at the Healdsburg sangha.

A former prince, Siddhartha left home at age 29 on a spiritual quest. He spent the next six years in severe ascetic practice, frequently going without food, shelter, and comfort. But at the end of that time, although recognized as having attained a high spiritual level by others, he himself felt that the answer was still not realized.

So he seated himself under the Bodhi Tree and vowed not to move until he became enlightened. While sitting, he focused on the ultimate nature of all things, “emptiness.” Emptiness does not mean nothingness. It means the absence of distinctions, and a clear vision of the complete interconnectedness of all things. This is what we do during zazen – letting each thought come up, and then letting it pass, continuing to sit while being aware of body and breath.

Buddha sat under the Bodhi Tree for seven days. During that time, Devaputra-Mara (chief of the demons) conjured up fearful visions of falling rocks and mountains, and blazing fires. But Buddha’s concentration was so great, that through his samadhi the rain of stones turned into flowers, and the fire became rainbow light. Next Mara went to enticement, sending countless beautiful women. He also tried to tempt Buddha into the trap of ego, thinking himself separate from and better than others. Buddha resisted all of this.

On the eighth morning, he looked up and saw the morning star twinkling on the horizon. In that moment, he experienced a deep and profound enlightenment. He saw there was a “middle way,” lying between self-indulgence and self-denial. And he sensed the interconnectedness of all things,

The Dalai Lama said, paraphrasing, that at the heart of Buddhism lies the belief that the potential for enlightenment lies within each human being.

Buddha was merely a man. The way is as open to each one of us as it was to him.

Ripples in the Water

To what
Shall I compare the world?
It is like the wake
Vanishing behind a boat
that has rowed away at dawn.
–Sami Manzei

For the past several days, I have been listening to CDs of a book by Jack Kerouac, Wake Up: A Life of the Buddha. It was billed on the cover as Kerouac’s version of the life of Siddhartha Gautama, the man who would become the Buddha. I was expecting a novel, something along the lines of Hermann Hesse’s Siddhartha, but in Kerouac style. Nothing prepared me for what I heard.

Apparently, Kerouac used ancient texts (or translations of them) from various sources, piecing together an almost Biblical-style life of the Buddha. The language is formal, stylized, reminiscent of Old Testament translations. The story line was there, sporadically, but much of the book is focused on sermons, teachings of Buddha, rendered in mind-numbingly repetitive and convoluted form, so that my head was swimming as I tried to make sense of all of it.

Listening to the Buddha trying to explain to his disciples the inconstancy of mind, the impermanence of the world, the unreliability of the sense perceptions, in words that turned around and around in circles, for five hours – I feel as if everything I ever knew about Buddhism has been lost in a whorling vortex of confusion. Much of the discourse is directed to Ananda, Buddha’s principal disciple and devout follower. I was heartened by the fact that in the midst of the teachings, Ananda said, over and over, “But, Blessed One. How can that be?” or some such statement, always asking for further clarification. However I was disheartened by the fact that eventually it all seemed to become crystal clear to him, while I was still lost in the fog.

I am wondering if some of these teachings are similar to Zen koans, riddles with no answer, that must be answered anyway. Is it simply the contemplation, the applying of one’s mind to the task, that eventually bears fruit, giving you an understanding that is beyond logic? Or am I just woefully inadequate for the task?

There were, thankfully, a few crystalline moments. One was when the Buddha was comparing life and the world to a ripple in the water, saying that it arises from nothing, returns to nothing, and cannot be defined since it dissipates almost as soon as it appears. Which led me to the poem copied above…

Anyone out there able to offer enlightenment on the subject of central Buddhist teachings?